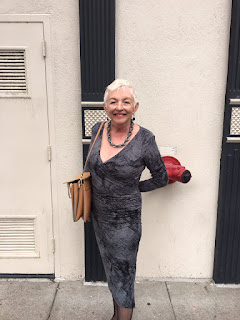 Three days before Christmas, I was sitting at my kitchen table watching CNN News, and drinking coffee.  A white cloud came down over my right eye and rendered me blind in that eye.  To say I was terrified is not an overstatement.

Within 5 or 10 minutes, my sight slowly came back.  Fortunately, Alex was home and took me to the hospital emergency room where I would have about 10 hours worth of tests, pokes, prods, and so on.  It was determined that I had experienced something called "Amaurosis Fugax", also sometimes called a TIA or mini-stroke. The ER doctor coordinated with my primary care doctor and I was set to meet with him the Monday after Christmas.

I waited to see if the weird stuff would happen again after I got home from the day of ER tests.  I was feeling stressed and frightened.  Christmas came and went without incident, but I couldn't get past the fear of "what comes next".  It didn't help that multiple people started telling me about somebody they knew who "had exactly the same thing and then they died".  Worse, even, I watched the movie, "Legends of the Fall" with Brad Pitt and Sir Anthony Hopkins, which depicts Hopkins after a supposed stroke struggling to walk, unable to talk, walking around with a tablet to write on, while he drooled and slobbered constantly.  Oy vey!

The doctor appointment on Monday was fairly low keyed.  My doctor is a calm person and I trust him completely.  He told me I would have to have more tests, visit an eye physician and surgeon, and a neurologist, and perhaps a vascular surgeon in the next few days.  At least there was a plan.  I had a CT Scan, Angiogram, with contrast dye which was fairly quick by also fairly scary because I was told I would feel "warm" from the dye injection.  I actually felt my womb and ovaries heat up like they had been zapped in a microwave oven.  Warm?  Hah!

The eye doctor explained to me that Amaursis Fugax is not a diagnosis, but a description of what happened.  He also said that it could have been caused by an ocular migrane or a wide range of other undetermined factors.  Further good news, he told me that my eyeballs are healthy and I have very good vision.  I was feeling better by the moment.

Two days later, I visited a neurologist.  It was a strange doctor's visit.  First thing, the guy shares offices with two OB/GYNs.  They actually all share one office and one exam room, and play musical chairs with each other to see patients.  While the doc and I were discussing what had occurred with my "episode", people in the waiting room could hear every word with said as clearly as if they were in the same room with us.  I'm just glad I wasn't there to see the OB/GYN about STDs.

My next appointment was with a vascular surgeon.  Long story short.  I'm okay.  I do not need surgery, or anything except a low dose aspirin every day.  Then, of all things, David Bowie died at age 69.  Two days later, the actor from Harry Potter died at age 69.  Do you see where I'm going with this?  My mother was a whimsical creature.  She identified with actresses Jean Harlow and Marilyn Monroe.  Harlow died at age 26, and Monroe died at 36.  My mother announced that she knew she would die at 46.  (No, she died at age 81.)  But all at once, I started feeling like I was turning into my mother.

I waited up until midnight the last night of my 69th year waiting for the grim reaper to come and get me.  I also made Alex stay up with me.  I was so relieved when midnight came and went and I was still breathing.

I never expected it would feel so damn marvelous to turn 70!