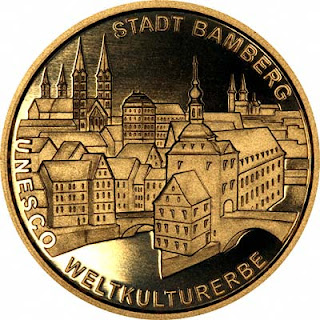 I had a boyfriend named Otto. For birthdays and other occasions he gifted me with German gold coins.

I thought he was being very impersonal with his gifts, and I stuck the coins in a drawer and forgot about them for several years. I had about ten coins from the year Otto and I kept company.

Otto was an interesting but strange man who was born in Germany. He moved to America after the war, and worked as a mechanical engineer. I liked his accent and his big hands and his cold eyes. I didn't really like listening to him complain about how hard it was for him to be in the "Hitler Youth" movement when he was 16.

I finally took the coins to a dealer when someone told me I should have them appraised. Much to my astonishment, the coins were very valuable, ranging in price from $250 all the way up to $400 for a couple of them. Who knew?

I sold the coins and bought shoes. And I remembered Otto with more fondness than I had before.
Posted by Linda Medrano at 10:35 AM