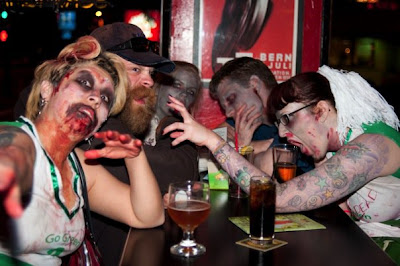 Last Saturday was the 2nd Annual Zombie Pub Crawl in my town.

My husband and I did errands in the late afternoon that included going over to check out the new "Ross" store that has come to our local shopping center.

The "Ross - Dress For Less" store is exactly like all of the others. Still, I was curious to see what it was like, expecting to be charmed or impressed or something. I was neither charmed nor impressed with the store. It was packed with people and had a line for the cashiers that stretched all the way to the back of the store.

Looking at the long lines, I couldn't help but notice that there were some very garishly made up people among the clientele. Black rings and smudges around eyes, lipstick smeared onto chins and necks, etc. I thought to myself "Queer!", and did the smart thing and got out of there.

When we were walking out, we passed a buxom young lady, dressed in black who was downright ghoulish in appearance. She had a horrid scar painted on her ample cleavage. I did a quick calendar check in my head and realized it was not Halloween yet.

It was not until the next day that a friend told me that she and her friends had attended the "2nd Annual Zombie Pub Crawl" the previous night. I've known for years that Alameda has a Vampire Bar called "Z's", but this zombie stuff is new to me. No wonder I don't go out at night.
Posted by Linda Medrano at 2:34 PM