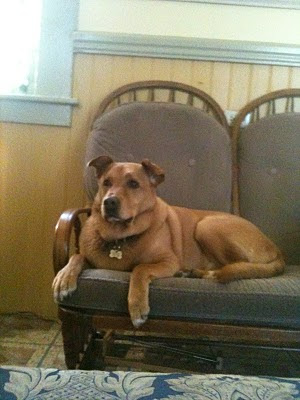 Early on Thursday evening, we went into Harry's apartment to watch the ballgame while we waited for our pizza delivery.

Harry was on his loveseat, Alex on his chair, and I was situated on the sofa. Six eyes were glued to the television screen. The Giant's scored first and we were jubilant! Harry even got into the "High Five" action! Damn, he's a smart dog!

For those of you who aren't sports minded, our San Francisco Giants are one win away from going to the World Series for the first time since 2002.

In 2002, Alex was in the Kingdom of Saudi Arabia so I watched the Giant's lose the World Series alone. I was very sad to see them lose.

I was even sadder because I knew Alex would be watching the game and it would depress him too. It was bad enough that he was in the Middle East for a year's deployment but to have his beloved Giants lose a game they should have won was just a heart breaker!

Fast forward 8 years. The Giants are in the playoffs and one game away from winning the Pennant. We had the champagne chilling, the crystal flutes on the table, and our ace pitcher on the mound. Things were good until the 3rd inning. Then things turned not so good with a couple of hits and sloppy defense in the infield.

The unthinkable happened. The Phillies won the game 4 to 2.

Now the Giants must travel to the hostile territory of Philadelphia to try and win one of the next two games. Not an impossible task, but one that worries us.

Still, this torture is better when Alex is at home and not in the Saudi desert. And the champagne will just have to keep chilling. Bring me a beer, Alex.
Posted by Linda Medrano at 9:56 AM