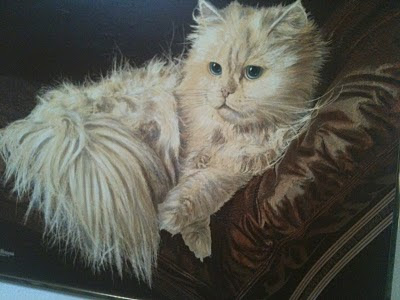 Sophie was a cat who had it going on.

She was the kind of cat you would give long stemmed red roses to.

Sophie knew how to enjoy life. She was elegant and refined. She was also very particular about things in general.

Sophie demanded that her litter box be cleaned after each and every use. If it was in the middle of the night? Too bad. Sophie would also approach her water bowl and vocalize that she wanted fresh water, not the water than had been sitting there for an hour.

Sophie posed for the artist so she could take a photo. The painter took about 200 photos of her before getting just the right one for her oil painting. This took 5 days because Sophie refused to pose for more than a half hour a day.

It took about an hour a day to groom Sophie. She made you follow her around to groom her. It amused Sophie to see people crawling around on the floor after her. She was a fun girl with a great sense of humor. Sophie liked to sit up in her cat tree and put her paw and claws into anyone's hair that passed by. If that person squealed, it made her day.

Sophie was very beautiful and she knew it. She was also arrogant and felt superior to other cats. For that matter, she thought that dogs were a lower life form. (Come to think of it, Sophie felt the same way about humans.)

I loved Sophie even though she made me feel inadequate, awkward, and ridiculous most of the time. A beautiful female can do that to me and to many other people.

She's gone now, but I still think about her.
Posted by Linda Medrano at 3:07 PM