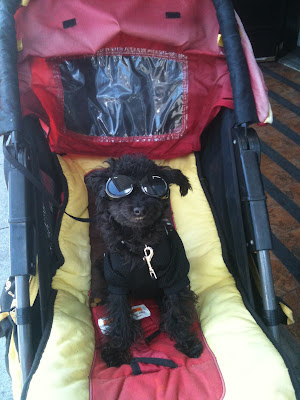 She lives here in Alameda. We encountered Giselle and her owner today at the Park Street Art and Wine Festival. When I first saw Giselle, I thought the glass of wine I had was giving me a vivid hallucination.

I think I said "Oh Wow! Alex look at this pup!" I was not really praising the little critter, but it was kind of like the lady we saw today with the purple hair, tattoos on her arms and legs, daisy dukes shorts, and high, high heels with the untethered 50 inch breasts. You do have to say "Goodness me! Would you look at that!" But that's not to say that I would dress like her. (And it's not to say I have any 50 inch breasts either.)

There is something that bothers me about dogs wearing sunglasses. It just looks wrong. Giselle was also wearing an Oakland Raiders jersey. She is a little black dog and it was a hot day (maybe 68 degrees). She did not need a jersey. (Conversely, the purple haired lady with the 50 inch jugs did need a bra.)

I suppose taking your dog to a fair in a baby carriage makes sense on some level. There are a lot of dogs there and a tiny one like Giselle could be devoured in one gulp by any average sized dog since she weights maybe 3 pounds dripping wet.

My dogs are big. Harry and Honey do not attend fairs or festivals. They are inclined to be obnoxious toward little "slipper-shoe" dogs. Also, I don't like crowds and I think it's too much stimulation for the dogs. People walk up to Harry and want to pet him. People cross the street to avoid Honey. And it's difficult to get through crowds with big dogs who are trying to grab ears of corn out of kids' hands.

Honey and Harry are not big on wine or art either for that matter. They are better off staying in their home, taking a nap, and warning off potential thieves and troublemakers with their size, ferocious growls and barks. Neither of them wears sunglasses.

Little Giselle doesn't make a sound. She looks like a toy. I doubt she would ever frighten any critter.

But she is pretty and isn't that what California is all about?
Posted by Linda Medrano at 6:47 PM