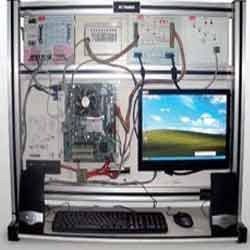 Alex worked on performance reviews all weekend. He was talking about employees who were top level engineers, but they had no interest in mentoring, no interest in interacting with customers, and very limited social skills. These employees just wanted to put their heads down and write code. The problem is, the company wanted more from them than their software skills.

When I was about 35, I left a job at Chevron because things got "complicated". I had married and divorced a man who was a manager and I kept running into him in the elevator. After 12 years at Chevron, I decided to cash out and go do something else.

I went to work with a small "high tech" firm that manufactured computer keyboards and terminals. I started out as a "secretary" for the Director of Sales, but when he got fired, the Director of Marketing asked for me. I worked for this marketing guy for about a year. It was safe, boring, and just not "all that", but it was a job.

Everything changed when the company hired a new Vice President of Engineering named Jon. As part of his employment agreement, Jon wanted an "assistant". To my surprise, he asked for me. Jon had zero requirements for administrative help. (He was better as a word processor than I was.) My job included sitting in on all meetings and interviews and giving Jon my opinions of the proceedings. Jon also took me everywhere with him, including to purchase random electronic parts.

When it came time for my first "performance review" from Jon, he asked me about my job satisfaction. I told him honestly that I felt like I wasn't "doing" anything. When he asked me what I wanted to do, I told him I wanted to work in the hardware area and learn to wire stuff and solder eproms and such. Jon agreed that I would be working in the lab whenever it didn't interfere with me being his "assistant".

I was thrilled. I had a little counter space, equipment, and a high stool. A couple of the hardware guys taught me how to read schematics, wire a keyboard and do basic soldering. I was in heaven. I didn't have to interact with anybody. I could just put my head down and do my job. (I would have probably been wonderful on an assembly line too.) I think that may have been the first time I realized that my intellect was probably a "dull -normal". I loved doing this stuff. It fulfilled me. Unfortunately, Jon went the way of many other honcho's at the firm. Yeah, he got replaced. The new VP of Engineering wanted me to take transcription and word process morning till night.

I moved on to another company where I entered the wonderful world of Marketing and Sales. I did pretty well at it for the next decade, working first for engineers, next for architects, and then back to engineers. I was okay putting my hand out to shake a potential client's hand and handing them my "Director of Marketing" business card. But I never liked doing it. In fact, I hated it. I made cold calls and set up meetings. I solved client problems. I wrote proposals and prepared presentations. I did it well, but all that "people contact" made me a little sick.

I would much rather sit on a lab stool and do wiring or something else dull-normal. I am not an extrovert. I am an introvert.

So I understand Alex's engineers better than he does.
Posted by Linda Medrano at 8:42 PM