I'm Not As Cool As I Thought 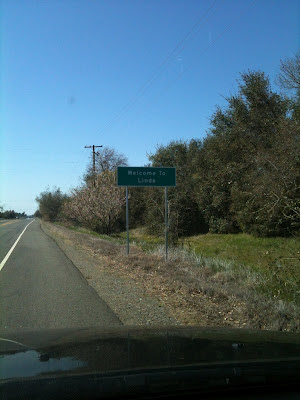 I've told a lot of people there is a town named after me in Yuba County, California.

Turns out, it's not a town at all. Linda is something called a "Census-Designated Place", or CDP. Roughly 17,000 people live in what I thought was my town. Linda, California sits right on the border of Beale Air Force Base.

When Alex has to travel to Beale, sometimes we go with him, "we" meaning the dogs and me. Because Alex is retired-military and a defense contractor, we have used the base lodging on occasion. It's really not bad. We settle ourselves in a 3 or 4 bedroom townhouse and there is a yard including a sheltered kennel area for the dogs.

The base is huge and pretty self contained. They have a restaurant and a bar with outdoor seating and I can drink enough to not think the food there is inedible. Or we can go to the movies or workout in the gym. We can also go to the shooting range, or bowling alley. See, it's a fun place.

What usually happens though is not really so fun. Alex goes to work and I watch television for hours on end. There is nothing I can really walk to around, and there is terrible cell phone service for some reason. I can sit out in the yard and watch the UFO's fly over. Oh I know they aren't really UFO's; they are just airplanes that I've never seen before. That's fun for 5 minutes. I could use Alex's iPad, but I don't like the thing. It has a weird keyboard and I can't type on it easily.

The last time we stayed on base, it was in the summer time and pretty hot. Harry went out in the yard to relieve himself and I was horrified to see that he had a very bloody stool. I tend to panic over things like that. I couldn't get my cell phone to work and so I had no way of contacting Alex. (Plus, Alex can't take his cell phone into the work area anyway because of security concerns.) By the time Alex called me on his break, I was having almost a full fledged nervous breakdown. Alex left the job and came to pick us up and drive us to Marysville (15 miles away), so that Harry could be examined by a vet. Harry was fine. I was a wreck.

This whole area is like the country. I don't do well in the country. I think Harry feels the same way and that's even what caused his bloody bowel syndrome. There is nothing in that whole area that is over two stories high, except the WalMart store, in that Census-designated place, Linda.

I saw rabbits running in the field. I saw a fox. And I saw a lot of people with missing teeth in Linda, California. I think it's the meth capitol of the United States.

I'm not going back.
Posted by Linda Medrano at 3:15 PM