Son Of A Motherless Goat! 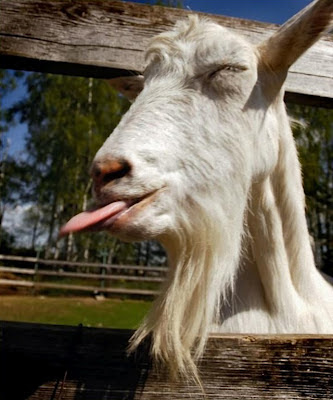 I'm in favor of free speech.

There are a lot of people out there who push the limits of free speech and that's usually okay with me. Howard Stern is one such person. I don't care for his crudeness, so I don't listen to him. Fair enough, right?

Bill Maher is another fairly crude guy. His language offends me, so I don't watch his show except on rare occasions. Maher can be very funny, but his brand of humor being cruel makes me not a fan. I have a choice. I can tune in or not.

It sort of bugs me when some men resort to sexual terms to denigrate woman. If they want to silence a woman, the words slut, bitch, tramp, whore, and even more colorful slang words for female genitals pour out of their mouths.

(Of course, we have all heard the word "prick" to reference a man. Recently, the term "douche bag" has gained popularity, although I'm not really sure why. Wouldn't "enema bag" be an even worse term if you really think about it?)

Recently, a conservative "shock jock" castigated a young female law student and called her names on his radio show. This man didn't agree with her view that contraceptives should be part of her health insurance policy. He ranted on and on saying that she wanted to get paid to have sex, that she was a slut, and that she was a prostitute because she testified and voiced her views about the subject. The clip showing this man's broadcast was shown on every news channel and all over the internet for several days. The attack on the student was really nasty. I felt dirty listening to his words.

Because I'm an emotional creature, when I watched the young woman's testimony, I felt very upset that she had been verbally attacked in this manner. You see, I couldn't help but think of my daughter in the young woman's position, or my daughter in law, or one of my 4 granddaughters, for that matter. And, emotionally, I wanted to slap the man's face for his ugly words. Instead, I vowed to turn off any programming that featured the shock jock.

As long as there are people who will listen to and encourage the ugliest attacks and incitements to hatred, we'll have people like this on our airwaves. It seems the American public has quite the appetite for the vicious and even the dishonest. Lies and hatred seem to be just as protected under the free speech banner as truth and beauty. And that's fine.

We all have our own remote controls.
Posted by Linda Medrano at 2:47 PM