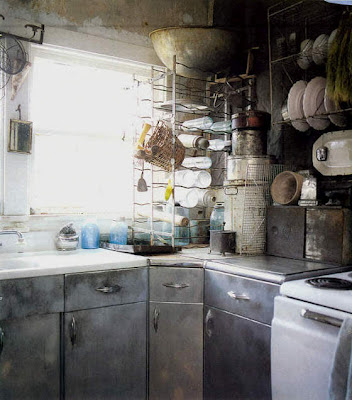 Do you remember that scene in "Fatal Attraction" with Michael Douglas and Glenn Close?  I think they had sex the first time in the kitchen right over the dirty dishes in the sink.

Now I'm all about being spontaneous and such, but I really question having sex on top of dirty dishes.  It just seems wrong to me.

They (Michael and Glenn) were in her apartment and if memory serves, she had fixed him dinner first.  (I guess that was a blessing since the dinner plates were probably untainted when they used them.)

I'm really not prudish, but I may be a little fastidious where it comes to my kitchen, particularly the sink.  If they had done it on the stove it would have bothered me too.  Actually, the kitchen table wouldn't have been that bad if there was a tablecloth and they pulled it off when they were through and threw it in the hamper.

Another question I have is why in the movies do the actors always have sex standing up. The woman is usually against a wall and the man grabs her and she jumps up and wraps her legs around his waist.  Excuse me?  Does that make a lick of sense to any of you?  My poor husband would get a hernia if we ever tried such a thing.

Okay, just to let you know I'm as cool as the next girl,  I have no such qualms about a laundry room or a car.
Posted by Linda Medrano at 12:32 AM