Drama Makes The World Go Round! 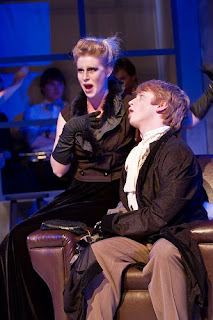 There's a lot to be said for drama in our everyday lives. Sometimes, we have to create it ourselves!

Take this morning! I'm sitting on the telephone in the office, (scratch that!) I mean I'm talking on the telephone in my office and I gaze out the window to the street. A lady is walking to a car across the street. She is wearing a hat with cat ears on it. I have no idea who she is. She got in her car and drove away. I had to get off the phone because seeing this gal had truly distracted me. From what I could tell, she looked perfectly normal. Perhaps a middle aged woman in perfectly regular looking clothes.

Who on earth could she be? What perfectly normal woman would stick a cat hat on their heads in the morning to go get in a car and drive away?

I got the mail today. In the mail was an envelope from the Department of Motor Vehicles addressed to my husband. I felt the envelope and it had something in it that was hard. Putting two and two together, I figured it was Alex's driver's license that he has been waiting for. I telephoned Alex at work to say "Your driver's license came in the mail". I did this because he's has mentioned he didn't know why it hadn't come yet. (His birthday is on Thursday, so he needed the license obviously.)

I didn't speak to Alex when I called because he was away from his office probably doing something very important, so I left a voice message. He called three minutes later and said "Did you open the envelope?" I responded that I had not. (I don't like to open other people's mail. If it had looked personal / and or from a girlfriend or something, I would have carefully steamed it open to see what was inside.) I didn't need to open this envelope to see what was inside. I could feel something hard in the shape of a driver's license inside.

He asked me to go and open the envelope. Being a compliant and helpful wife, I did his bidding. Then I told him it was a laminated card with his picture on it that was very similar to a driver's license. In this case, however, someone had put a big X over his face and the words "Don't give this guy a license" were written on top.

Ha ha, says Alex. Very funny. Then Alex says, "Do they say anything?" Uh, like did they write you a letter Alex? Did they thank you for renewing your license or something? Wait! Yes, here it is! They are asking for your body parts if you croak! That's about it, Alex.

My office is great. I have lace curtains so I can see out on the street but nobody can see in. I used to watch the drug dealers across the street for hours! I even got to see raids. Now this is some home entertainment I'm talking about! Street blocked off, 50 cops, dog cops, snipers, Swat teams! All this for one little skinny white guy about 20 who lived with his little skinny white girlfriend across the street and sold drugs I guess. I was kind of sorry when they moved. They were actually pretty upscale drug dealers I think. They looked okay as far as I could see. I would have hated to have drug dealers who were low life's living across from me but these guys were fine.

I get my appreciation for drama from my Mama. She was a very dramatic woman. She would leave my Dad periodically and storm out of the house with all 4 of her daughters. We would walk for a mile or so, and then she would make me faint on the street. Then she would go call Dad to come and pick us up because I had fainted dead away on the street. I got to be pretty good at it too!

My Dad would show up and take one look at me with my fluttering eyelids lying on the sidewalk! He would pick me up and put me in the car. I could recover then. Dad never really noticed that I fainted an awful lot for a healthy looking child.
Posted by Linda Medrano at 2:37 PM