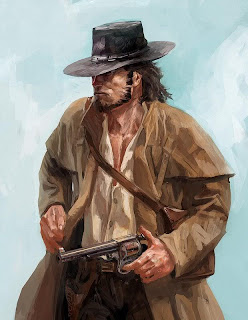 Okay, we've all seen him. The biker in the leathers climbing off the Harley; the guy who gets down out of the 18- wheeler wearing the sunglasses; the hardhat worker in the low slung dirty jeans with the sweat stained tee shirt and the tan.

Movies celebrate him. Look at Marlon Brando as Stanley in "Streecar Named Desire", Rambo, or vintage Clint Eastwood. Yeah, you're getting the idea. For that matter, we just have to go to the "Romance" section of the closest bookstore to get a look at him on the cover of a lot of books.

These guys are not "metro-sexual". They are not guys who you would serve a quiche and a fruit salad, now are they? What they offer is excitement, adventure, mystery, and perhaps a hint of danger. And I think they appeal to the most basic part of our nature. There is something "raw" in their masculinity.

While men seems to think they corner the market in the lust department, I think that women also have their fantasies about sexy, dirty, and dangerous looking men. Keep in mind however, most women are too smart to confuse a momentary surge of attraction for the real thing.

When Kathleen Turner, a romance novelist, fell hard for Michael Douglas, an adventurer, in "Romancing the Stone", it was a fun situation. I doubt many women took it too seriously. But when the tables turned and Michael Douglas, a cop, fell for Sharon Stone, an adventuress, in "Basic Instinct", it seemed more logical. Why? It made no sense to me at all that a successful novelist would fall for a dirty, sexy, dangerous guy for real. I had fewer compunctions about Michael Douglas falling for a beautiful murderess!

I really do think it's because men are more visual than women. Most of the women I know would look at a man, but he would have to have all the other pieces to the puzzle for her to be really serious about her interest. Looking sexy is fine, but it's just one small component. With some men, I think the appearance feeds the fantasy and they may tend to overlook components that would be "deal breakers" for women.

I've known a lot of men who have fallen hard for beautiful, selfish, and untrustworthy women. I only know a few women who insist on hooking up with Mr. Wrong just because he's attractive.

Now, this post is obviously nonsense. I had nothing to say but wanted to wash the taste of cats, antibiotics, neutering, iv's, tetanus shots, rabies and bites out of my brains and out of my blog. I figured it was better to switch to something sexy, dirty and dangerous!
Posted by Linda Medrano at 4:08 PM