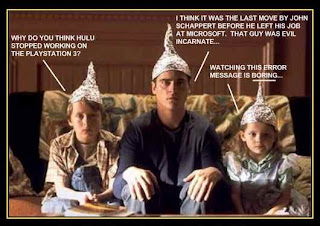 I think every neighborhood has one.

He's the guy who doesn't think you should talk about certain things on the phone. He worries about the government and their secrets.

He also is usually more plugged in than anyone else on the block to what is really going on in the hood! He always knows more than anybody else.

We have a "Conspiracy Theory" guy who lives across the street. He's actually a pretty nice person, but perhaps certifiably strange. Craig has been on disability since we moved in, so he's usually at home.

If somebody is having trouble in their marriage, he knows all about it and knows what all the underlying issues are. When we had some young people peddling drugs out of an apartment on the block, Craig knew all about it before anyone else even suspected. We apparently have a prostitution ring in the next block too, but you couldn't prove it by me.

I guess the best way to say this is that he's fairly loopy, but not always wrong. He claims to have acted as an informant for the police (who Craig claims telephone him regularly to keep him in the loop with "what's going on" in our town). While I find this of questionable veracity, you also know there could be some element of truth in it although I doubt it. Still, Craig has been known to hit a home run from time to time.

For example, he's told numerous neighbors that Alex is in the FBI or the CIA. It changes. We have tried to correct Craig and say "It's just not true" , but he reacts with a "ssshh" finger to lips and swears he won't breathe a word. (The only way Craig could have gotten this from me is that I occasionally tell people Alex is an FBI guy but then explain I mean "Fat Bellied Indian".) My husband would not argue with this description.

I was rather shocked when he came over yesterday to ask how my leg was after the cat bite. (Who did he hear that from?) I told him I was fine. Craig then encouraged me to go to the doctor and insist on some tests. "They sometimes put poison on cat's fangs, you know." Uh, no, I didn't know, nor am I sure who "They" are. But us CIA types need to be extra careful, you understand.
Posted by Linda Medrano at 3:13 PM