A Wrongful Death and A Verdict's Aftermath 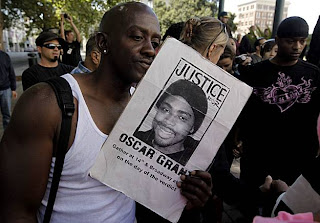 In the early hours of 2009, New Years Day, 21 year old Oscar Grant was coming back to Oakland after spending the evening in San Francisco with friends.

Mr. Grant was using Bay Area Rapid Transit (BART). Apparently, there was a fracas on the train involving Grant and others and BART Police were called. One of the transit cops made Grant lie on the platform face down to subdue and handcuff the man. While in this position, Oscar Grant, an unarmed man, was shot in the back and killed by a BART policeman Johannes Mehserle.

There were many bystanders that night and a lot of them had video recorders. The event has been viewed by everyone in the Bay Area at one time or another. During his trial, Officer Mehserle stated that he thought he was using his taser gun when he fired the shot into Mr. Grant.

There was a mostly peaceful protest and probably 3,000 people outside of the City Hall area by 5 PM. Some people gave speeches, others prayed, and the general consensus seemed to be that this verdict was not a popular one. Still, the concerned citizens did not seem to be wanting a violent confrontation with anyone, they just wanted to vent their feelings as is their right under the blanket of the Constitution.

The police kept a low profile until street intersections were blocked by an increasingly unruly crowd. Oakland Police came out in force in full riot gear. Still, there were no confrontations other than verbal with the protesters and the police showing admirable restraint. 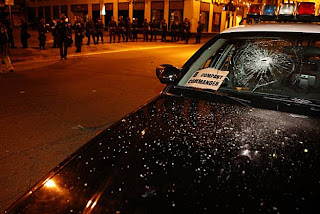 When the sun started to go down, most of the protesters took their signs, and left the area, but about 200 people did not. These people were not there to mourn the loss of one more black man by a gun. They had another agenda. Before long, windows were being smashed so that looters could grab items in the stores, many of them "mom and pop" stores that would not be insured for their losses. Several banks in the City Hall area had their windows broken and the Sears Robuck store had a display bedroom set in a window set ablaze by the vandals. Graffiti was sprayed over every available surface. Windshields were smashed on police cars. 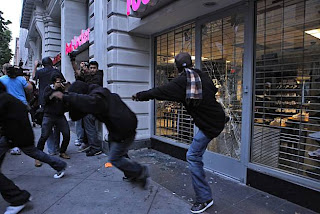 There were 80 people arrested, and 75% of them were from places other than Oakland. Early on in the evening, I was feeling proud of Oakland for handling the protest with dignity and respect, and for the police for giving people their space and the opportunity to vent. Later last night, I watched in horror as these "anarchists" tried to take advantage like they always do. 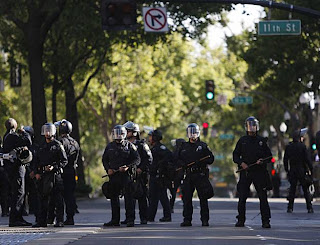 I hope someday that police won't make mistakes when shooting people. I hope some day that the major cause of death for young black males isn't murder or violence. I hope some day that people will not accept looting and mayhem as a form of grieving because it's not. I am very sorry for the Grant family who have lost their son so wrongfully.
Posted by Linda Medrano at 3:36 PM