The Fan In the Too Tight Shirt 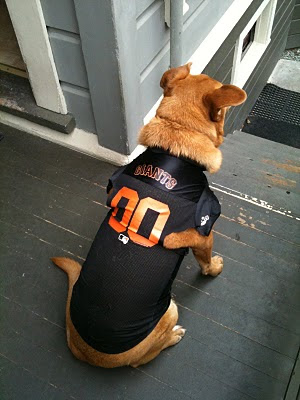 This jersey is an extra large.

Harry is a furry mammoth. He is listening to the World Series pre-game show on KNBR Radio because he hates Joe Buck and Tim McCarver so much. These guys are Fox broadcasters.

I hate them too.

I don't know why Fox is broadcasting the World Series. They completely cut out 84 year old Tony Bennett singing "I Left My Heart In San Francisco" at the beginning of the game. Give me a break!

Then to add insult to injury, Fox cut out the part where Willie Mays was supposed to throw out the first pitch of the World Series. Willie Mays is my idol. All baseball fans like to see Willie. Unfortunately, Willie was not there last evening because of illness. But there was a line up of Giants' royalty from yesteryear on the field, including Orlando Cepeda, Monte Irvin, Juan Marichal, Willie McCovey and Gaylord Perry. I really wish I could have seen those guys.

What was on the Fox programming while the first pitch was being thrown? Joe and Tim making stupid comments is what was shown, then a cut to commercial break. Thanks Fox.

It's like a religion that never mentions God but talks about Tupperware instead. Fox is not doing a good job on the Series. But am I really surprised at that? No. I'm not. These are the same people who bring us those newscasters like Glenn Beck.