So I Met This Guy From Turkey... 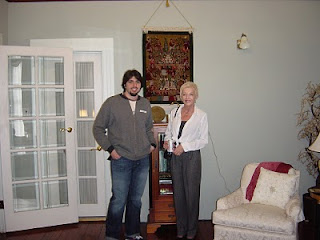 I was looking for a Turkish Hereke rug on the internet.

What I found was a new nephew named Saltuk. He and I became pen pals and fast friends. Saltuk guided me through all the steps I needed to know to acquire just the perfect silk Hereke rug.

That he was in Istanbul and I was in Alameda was not really an issue. I invited him to come and visit me. When I met him at the airport, we were both already old friends. I love it when that happens. Saltuk calls me and Alex a few times over the year just to check in on us.

He got married two years ago and now has a little boy. I can't wait to meet his wife and baby. Saltuk has invited us to come and visit him and his family and we may do that.

Several years ago, I was taking the train from San Jose back to San Francisco on a Friday after attending a conference. My seatmate on the train was a very nice young man from India named Deepak. He was in the US for a Microsoft function. Deepak asked me if I could recommend a nice hotel that was safe and not too expensive. He was going to spend the weekend in San Francisco and do some shopping for his family back in India before leaving on Monday.

Without giving it a second thought, I told him to come on home with me. He did. Alex was surprised when he found we had a house guest, and he privately asked me if I was sure they guy was not a serial killer. (He was joking.) We took Deepak on a sightseeing tour of the City and he was really thrilled. He was able to spend his money on gifts for his family rather than on expensive hotel rooms. Deepak and his wife wrote us lovely letters thanking us and we've kept in touch.

Not long after Deepak's visit, a friend of mine went to India and stayed with Deepak and his wife for a week. She said they were lovely people and really went out of their way to make her feel at home.

I guess I could be putting myself in danger, but I have never had a bad experience. And I love meeting new people. My friend have told me I'm being foolish to do this, but they don't have invitations to Istanbul or Bombay either. I'll keep taking my chances. I think my odds are pretty good.
Posted by Linda Medrano at 3:28 PM