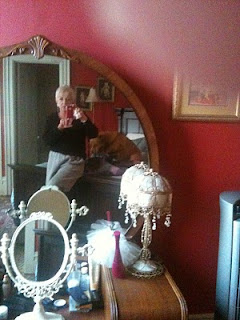 Let's face it, no matter what you are addicted to, it's not a good thing. Being addicted to "posh" coffee is already taking its toll on me and mine.

Alex gets up at 4:30 AM to leave for work these days. Don't ask. He drives for about 3 hours to get there. (Not really, but it's a long way.) Also, Alex deals with things that are not always on west coast time.

Like any sensible wife, I do not get up to see him off in the morning. That's just too early to even think about getting up. Plus, I do like to sleep till 9 because that's a civilized time to rise.

This morning was a little different. I could smell coffee. As if I was sleepwalking, I made my way downstairs and to the kitchen. The coffee maker was hissing and spurting out fresh coffee. Alex was in the shower, so I went ahead and drank his coffee. It was wonderful.

I set the coffee machine to make another cup of coffee for Alex, but then I drank that one too. When Alex appeared in the kitchen, freshly turned out to grab his cup of coffee and head out the door, I had the good grace to apologize. "Just a minute, Honey, and I'll make you some more." I said sweetly.

My adoring husband said, "Jesus, I have to go." Oh come on, it only takes a couple of minutes to make some more. Well, Alex is a master of precise timing and so he had to leave without his coffee. I felt really bad. (Oh, not really! Get over it Dude!)

I looked at the clock and saw it was 5:05 AM and wondered at my sanity. I knew it would be sensible to go back to bed, but said to myself, "Self, how about one more cup?".

It was an offer I couldn't refuse. Now truthfully, after three espresso cappuccinos nobody is going back to sleep. I can always nap later, I thought.

Wrong. I cannot nap. I have been waiting for an important package (one that will require a signature) and if I fall asleep, I won't hear the Fed Ex guy when he comes.

So the package came at 4 PM, and I'm thinking of going to have another coffee just so I can make it through the evening.

Maybe I'll just pour a spot of gin in it.
Posted by Linda Medrano at 4:15 PM