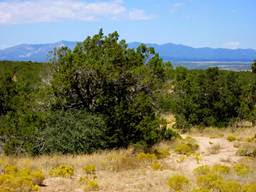 What does that really mean? If somebody gives me a horse as a gift, I probably will want to look in its mouth. It is also likely I want to have a vet look it over from head to tail to hoof. I will be expected to care for and feed this horse, right?

My husband Alex came home from a little jaunt to Arizona last week. He went down to see his family and take in some pre-season Giant's games. When he came home, Alex began telling me an astounding tale.

Alex's mother wants to give him approximately 200 acres of undeveloped land about an hour from Gallup, New Mexico. The land borders on the Navajo Reservation and has been in the family for a long time.

Alex is Navajo and he has a lot of family in the area. All these acres of land sound pretty good to him. To me, not so much. What would we "do" with land like this? Alex grins and says "we could get a double wide and live there!".

If I didn't know better, I'd swear he had been having at the peyote buttons, but no, that's not the case. Although Alex is Navajo, he is an urban Navajo. He was born in San Diego at a Marine Corps base hospital, grew up in Phoenix, Arizona, and has lived in the San Francisco Bay Area for the last 23 years. He has short hair and does not ride horses. I doubt if Alex has ever touched a sheep or been inside a double wide.

If Alex owns this land, what does he expect to do with it? Pay property taxes? Develop it? Oh I give up. I guess he could sell it. (Wait, this is family land we are talking about! "You don't sell land that has been in your family for a hundred years." says Alex.) Oh, yeah, right.

This reminds me a little of when we got married. Alex's mother fretted a lot about how she was going to afford the four sheep and two goats that she needed to give my mother as traditional gifts for our wedding. (My mother lived in a San Francisco apartment at the time.)

But, sweet as it sounds to give such a lovely gift, even if my mother had lived in a house with a huge yard, it's unlikely she would have wanted to care for sheep and goats. It was difficult talking Alex's mother out of the gift.

Alex is very excited to receive the gift of 200 acres of property from his mother. Maybe he can build a casino on it.
Posted by Linda Medrano at 3:52 PM