What Planet Is This Guy On? 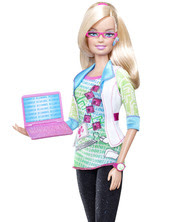 "This latest incarnation of Barbie is intended to appease hairy-legged feminists, who incesantly decry Barbie as a sexist icon. In reality, a miniscule number of female technical professionals look like this; the vast majority are overweight and dowdy, and utterly lack sex appeal."

I copied this comment from a publication because it sort of made me gasp. I did remove the name of the commenter and I won't name the publication.

"Hairy legged feminists?" Dear God! What an angry man this one is. "Overweight, dowdy and utterly lack sex appeal"? I gather he means that a female in an industry where she works on a computer and/or wears glasses, cannot be an attractive woman.

My husband has been a software engineer and developer for many years. I have met many of his female colleagues and none of them were hairy legged, particularly over-weight, or dowdy that I could tell. I'll leave the sex appeal part to the eye of the beholder.

Barbie has been around almost as long as I have. Little girls love her. I think making her look like a pretty engineer is a great idea. It's a new world, kids. Even when we laugh at her because of her impossible physical perfection, we can still applaud her for getting an education and a job.

Posted by Linda Medrano at 7:53 AM