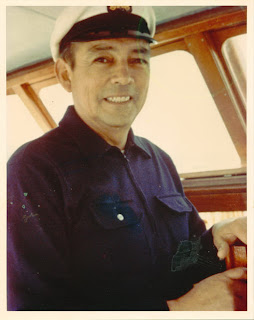 This photo was taken of my Dad a few months before his death. I guess being on his boat was the thing he liked best in the world.

Dad was a cop with the San Francisco Police Department. When he was hired on right before I was born, he was the only Mexican cop on the force.

In those days, there was a lot of racial prejudice particularly in the primarily Irish SFPD. Dad's name, Joaquin, was changed to "Jack", and other cops called him "Black Jack", but it wasn't a term of affection.

Dad married my Irish mother at a time that it was considered a "mixed marriage". He and Mom produced 4 daughters before the inevitable end of the marriage. (He was a guy who had a hard time turning down a pretty woman or a horse race!) And the women flocked to this handsome Mexican cop. Mom had finally had enough by the time I was 14.

I really didn't see much of my Dad until I was 21 or so. Then we reconnected in a big way. His new wife and he had two boys, my half bothers. Dad's wife cared for my son while I worked. Dad used to come by my apartment after I got divorced and had a 2nd child, a daughter.

In the dark days after my divorce, I would see Dad's police car parked outside and he would take a while coming in. Dad would bring in bag after bag of groceries for me and the kids. This was never done with fanfare, just a matter of fact taking care of business.

It's funny, I had always blamed my Dad for the end of my parents' marriage. That really was not fair. It truly does take two to tango! Dad had his bad points to be sure. But Mom wasn't the saint I believed her to be either. (None of us are.)

I'm so glad I got to know this man before he died. I can honestly say it helped me so much after I lost him way too early. And I was so happy that he knew I loved him!

I remember his funeral and the big police presence. There was a wreath in the shape of a police star and his badge number on it. They did Black Jack proud.
Posted by Linda Medrano at 10:22 AM