The Blond, The Shorts, And The Huaraches 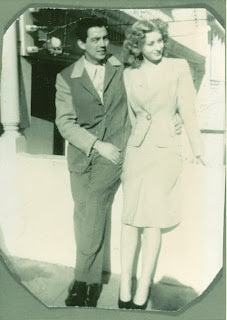 I remember my first trip to Mexico.

That summer, dad and mom and my two sisters and I drove from San Francisco to Baha to visit my dad's aunt Anna. I was about 6, Terri, was about 4, and Lisa was about a year old. This was about 6 years before my youngest sister Vicki was born.

Mom wanted to stop on the way, because it was summertime and hot in the car, plus, long drives were a challenge with 3 small kids all having various degrees of carsickness. Dad was just in a hurry to get there.

It was probably hard because although we didn't pull over for sightseeing, we did stop at almost every service station between San Francisco and Baha because somebody always had to go to the bathroom.

If memory serves, we left in the middle of the night for some reason, probably in hopes that the kids would sleep at least for part of the trip. I'm not sure anyone but the baby, Lisa, (held in Mom's arms the whole trip as used to be the norm) actually slept.

After an exhausting long drive, we finally arrived at Tia Anna's. My dad's aunt lived on the outskirts of a small town, but I have no idea where it was exactly. It was more of a compound than just a house. There were marble floors throughout, and it was amazingly cool inside. The house had a main building and quite a few other smaller buildings all around a large shady courtyard full of blooming flowers.

Tia Anna had 6 children, and there were servants everywhere. There were drivers, there were maids, there were cooks, there were nannies for the small children as well. Anna's eldest child, Becky, was 14 and had just graduated from high school. Mom was amazed that at 14, Becky was going to college in the Fall.

Nobody spoke English, but they were all very friendly, welcoming, and nice. Not long after we had arrived, the table in the courtyard was set and platters of steaming food were brought out and laid on the enormous table for us.

I later learned that Anna was the mistress of a very wealthy man. He had 3 or 4 women and families in the area. Don Miguel supported them all in style I gather. This man did make an appearance while we were visiting and he and dad spent many hours rattling off in Spanish, drinking beer, and smoking cigarettes! Miguel was an old fat guy. My dad's aunt was young and beautiful and I really thought this was somewhat peculiar. I mean, here Anna was so pretty and young! Why on earth would she have this fat old man as her "husband"? (Years later, I guess I figured that part out too!)

There was a marble statue in the courtyard of an Indian man with an Indian maiden in his arms that was very pretty. Mom pointed at the statue, and pronounced it "Bonita!" To her shock, it was immediately loaded into the trunk of our car. My mother seemed to catch on pretty fast that you have to be careful what you compliment! Seems that the mere compliment of any item would result in being gifted with that item!

Tia Anna asked my dad what she could give my mother as a gift. Dad asked mom what she would like and she responded carefully that she really would like a pair of Mexican sandals, "huaraches"! Anna was delighted and insisted that she take Mom into the town to the shoe store to find her a pair! Mom said that would be wonderful, and Anna said we would go right after lunch. Mom asked if she needed to change clothes and Anna replied that she was fine just as she was, in her blouse and pair of shorts. (Remember it's summer and very hot in Mexico.)

The big black car was readied and the driver opened the door for me and my sister to climb in the back. Another car carried my mom, dad, the baby, and Tia Anna. We got to the shoe store and went inside. Mom started trying on sandals.

Anna started laughing and pointed at the store window. There were about 25 Mexican men all looking intently in the window at the pretty young blond woman in her shorts trying on shoes! The word must have gotten out because before long, there were twice as many men, pushing each other out of the way to get a better look.

Dad was very annoyed and he kept telling mom that she should have known better than to wear a pair of shorts into a small town in Mexico. (Of course, he didn't really hadn't known any better either!) Anna seemed to find the whole thing hilarious! The next time we went to visit Anna, about 2 years later, even us kids dressed in skirts the entire time we were in Mexico!
Posted by Linda Medrano at 7:00 PM