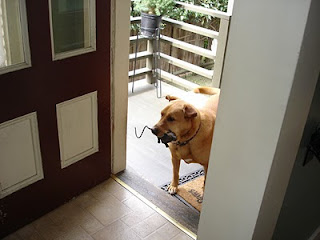 There is really something special about a gift that comes right from the heart.

It may not be the gift I've always dreamed of, but then what gift is?

Harry has gifted me in the past with a dead squirrel, but that did nothing to prepare me for the black rat.

My husband Alex is Navajo Indian. When he and I married, his mother went to considerable effort to try and buy 3 sheep and a goat for my mother as is traditional in the Navajo culture. Since I was older than Alex, she was actually getting a break because in my younger days, I would have been a 10 sheep woman.

My Mom was living in a condo and while she had a little patio space, she had to gracefully decline the gifts.

When my son John was in the Navy, he was on a West Pac cruise and they had numerous ports of call. Bless his heart, he bought me several really lovely gifts from Korea, Thailand, and Africa. One time, he sent home an enormous crate filled with goodies. (I did have to pay about $400 to receive the stuff.)

You can only imagine my delight when I found a large painting ( on velvet yet) of a tiger! I think it even glowed in the dark. Just what I've always wanted. There was also a Korean quilt that weighed about 100 pounds (and was that wonderful shade of mud!) I think it's safe to say that John drank a bit on those shore leaves.

My husband bought me a double barreled shotgun for my birthday a couple of years ago. For Mother's Day two years ago, I got the Walther PPK.

If only he had gotten me the bowling ball.
Posted by Linda Medrano at 10:30 AM