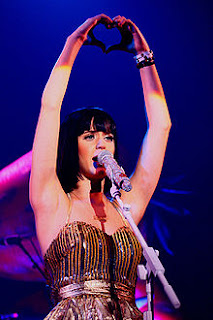 First of all, who is Maxim Magazine and why are they telling us about a top hot 100? I've never heard of them.

Katy Perry apparently beat out Megan Fox (of Transformer's fame) and Kim Khardasian (of having a big butt and a sex tape fame), but I only know one thing about her. Katy did a nice ditty called "I Kissed a Girl and I Liked It". (The reason I like this song was that I could easily revise it for Harry and sing "I kissed a squirrel and I liked it... Hope Peta doesn't mind it".)

How on earth could Katy Perry and that dumb song come in ahead of Nicky at We Work For Cheese? How could she come in ahead of the Glamorous and Mysterious Ziva of Ziva's Inferno? Or for that matter, what has she got on Jen of Redhead Ranting? I'll tell you what! Not a damned thing!

What is this Maxim's criteria? Megan Fox is pretty cute. I've never seen her in a movie though. What exactly is her claim to fame?

If they had named Lady Gaga I would have actually had to think it over. I think the woman is pure performance art and has drastically changed the pop music scene in a good way. She may not be your cup of tea, but the young lady is talented. I really love her somewhat androgynous demeanor and the fact that although I've seen a lot of her, I really don't have a clue what she looks like.

My point being, I do not really know what Nicky looks like, or Ziva, or Jen for that matter. But I know they are beautiful, talented, intelligent, funny and exciting women. No sex tapes required.
Posted by Linda Medrano at 9:49 AM