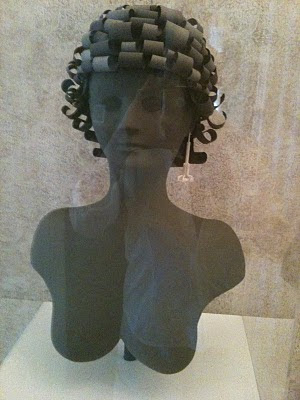 This is the beautiful and classic Permaneta.

She was given to me by Richard Knight, the artist who created her, several years ago right about the time he was diagnosed with cancer.

Richard died two years ago. He was a dear friend and I miss him to this day. I met Richard through his wife Judith who interviewed us for an article she was writing. Our house was one of the homes featured on the historical homes tour that year, and Judith is a teacher, historian and a curator at the local Museum. 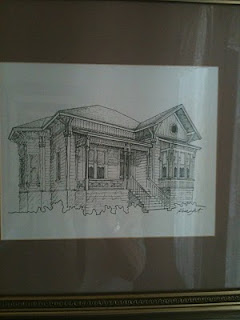 Upon Richard's death, Judith very generously gifted us with a number of his pieces, including some models, another steel sculpture, and some wonderful etchings, including one he did of our home.

Richard was an amazing man in a lot of ways. I met him when he was in his late 70's and he was one of the most vibrant, kind, and amusing people I have ever known. Judith was in her 40's and they had been "living in sin" as they liked to say for 25 years. They did legally marry about two years before Richard died, but I think they both liked the bohemian idea of just living together.

When Judith and Richard were at a formal party on a very hot afternoon, Richard stripped off his clothing and jumped naked in the pool. It was a sensible thing to do, but fairly unexpected with about 50 people around. I loved that about him!

Richard wore the grizzled pony tail, and a full beard and an Indiana Jones hat. And he tried to find me opium when I told him I would like to smoke it once before I die! Richard was open minded and extremely liberal as were almost all of their friends. He got such a kick out of Alex showing up for a party at their house dressed in his BDU's looking like GI Joe.

(Alex came by the party on his way home from a Reserve's weekend. He didn't wear the uniform as a costume, although sometimes I wish he would. I wear my nurse costume for him when he's good.)

I'm so lucky to have these wonderful reminders of my friend Richard.
Posted by Linda Medrano at 12:20 PM