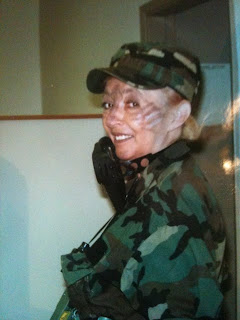 It's always been my favorite way to stop being bored. I love dressing up in makeshift costumes.

Alex has come home to find me in a black abaya, complete with the veil, enhanced with long false eyelashes because the eyes are the only thing showing, don't you know. That was a fun one.

I've also done a somewhat chubby ninja for Alex's amusement, but the result was not as fetching as I had hoped for. Leotards require a bit less in certain areas where I may overflow just a bit.

I can always pull out the long black wig, wiggle into a low cut black cocktail dress and voila! Elvira, Mistress of the Dark! But anybody can do that one. I like more extreme costumes.

I have a nurse's uniform complete with perky little cap, the white pantyhose and high heeled orthopedic white shoes. I can also do a great Marian the Librarian.

I got a boyfriend one time in the laundry room of my apartment house. I was wearing a gorgeous kimono with a fresh big white gardenia in my hair (which was long and black at the time and held up with fancy chop sticks). Come on! What dude is going to ignore that in the laundry room? Let's get serious.

Chico, the jazz musician who used to live next door to me had a girlfriend, Lisa, who was an exotic dancer. She gave me the most incredible black satin rhinestone encrusted g-string and matching bra. I've had so many years of fun with that! Actually, I passed the outfit on to my Aunt in Oklahoma for her 80th birthday. Yes, she did have a new boyfriend and he liked it too.

I have also done rough biker woman, complete with a bunch of fake tattoos and lots and lots of leather and silver. Or maybe that was just what I felt like wearing to the grocery store that day, I can't remember.

I've also done the Navy crackerjacks and they are great too. The only thing I haven't tried is a nun's habit. Those are harder to come by for some reason.

Costumes are really not just for Halloween.
Posted by Linda Medrano at 10:51 AM