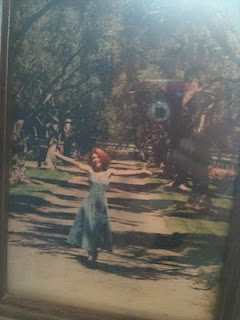 Jayne is part wood nymph, part cowgirl, part glamor girl, part philosopher, but all of her is beautiful woman. (And, yes, that is Jayne under the canopy of trees!)

Alex and I tossed Harry and Honey in the wagon and took the 300 mile drive down to see Jayne on Friday. She lives in a gorgeous spot located in the Santa Ynez Valley of California. This area is the heartland of the Central Valley wine country, which made it obviously very appealing to winos like me and Alex.

I telephoned Jayne to tell her we were leaving about 8:30 AM on Friday, because I also wanted to make sure I had the correct phone number, because yeah, that might have been a problem. (I've done it before because I transpose numbers as well as having a hard time following directions.)

I walked out to the car to find Alex fiddling around with plastic things he orders to hold his "equipment". He has his GPS, his iphone, his map holder, his cup holder, his dvd player, his itunes to scan, his books on tape, his kleenex holder, etc. and they all have to be assembled "just so". (Why anyone wants to have holders for everything is beyond me.) 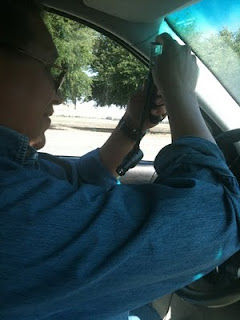 Alex gets advertisements from a company that offers "stuff for BMW's" and he orders it all. Never mind that it is all plastic, cheaply made and falls apart all the time. I sat in the car and watched Alex try and hook up his plastic stuff for 50 minutes. The directions were not that hard. Get on Highway 101 and stay there.

Alex also noticed then that we needed fuel. Then there were two required trips (traveling with Alex) back home to drop off things not needed and pick up things forgotten. It was 10:30 before we were actually on the road.

Jayne told us we would be driving about 4 hours after we hit San Jose (which is about an hour from where we live). It was a lovely and uneventful drive except for having to pull over about 20 times because Harry has anxiety attacks when he doesn't recognize an area. (Harry is afraid of the "country", "trees", and "loud noises".) Honey just sleeps while Harry whimpers and barks.

We got to our hotel about 3:00 PM, and I called Jayne and got directions to where she lives. Because I have trouble following directions, I finally handed the phone to Alex to have her repeat the instructions to him. I should have gotten nervous when I heard him repeat "Got it!" about 10 times, and I know he's got ADD even if nobody else acknowledges it.

I told Jayne we would see her shortly and we headed out after feeding the dogs, and running to the store because I had packed for everyone, but walked out without any toiletries or cosmetics for me which is simply not acceptable in Linda's World.

Alex had assured me we were only about 1/2 hour from Jayne's, so I figured he knew what he was talking about, (always a dangerous assumption). We were late getting to Jayne's house because Alex had said "got it" and Jayne and I assumed he meant "got the directions" when he had in fact, "got the baseball scores" while she was talking to him. Alex tunes out when people talk to him and he has the iphone in his hand.

If Alex had really listened to Jayne, he would have realized that we were closer to an hour away from her place since we were staying in Lompoc, a rather funny place and not very posh if you get my drift.

Alex and I do this kind of thing again and again. I talk, he doesn't listen. Still, Jayne kept her humor and wasn't mad at us when we got there about an hour after she expected us. She had also detailed to Alex exactly how to take the path to the right to her house. So Alex and I wandered down the path to the left of course. It's just par for the course when we travel.