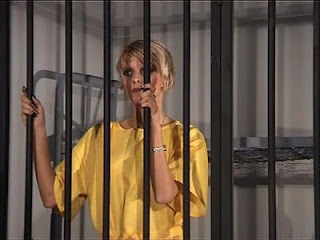 I've wondered sometimes if I have a proclivity for crime. I think the answer is probably yes.

The only thing that keeps me from committing a crime is that it would have to be "worth the risk", and I'm not sure that involves any upstanding moral concept at all.

Quite a few years ago, there was a computer generated error on my paycheck and I received a check for $178,216.22 for two weeks work. I thought it was hysterically funny and called my daughter and told her to grab our passports and meet me at the Pan Am counter at the San Francisco airport.

I finally told her I was kidding and she was a bit disappointed. I also showed the check to all my co-workers before I took it in to the president of the company and asked if I had been given a nice raise or if this was a bonus for the impromptu lap dance I had given him at the Christmas party.

Now, if that check was for $3 or $4 million dollars, and I thought I could get out of the country before the error was discovered, I might have gone for it. (Remember this was about 25 years ago when 3 or 4 mil was worth 3 or 4 mil.) As it is, it simply wasn't enough money to take and run with. I have expensive tastes.

When I was in my 20's, I was propositioned by an airline pilot who wanted to "have a friend" in San Francisco when he came through town. I was highly insulted when he said he would pay my rent for the privilege. Excuse me, my rent? Now, if he had offered to buy me a house, a car, a racehorse, and a boat, who knows! (I'm kidding about the boat. I hate boats.)

I did egg a man's house one night but that was deserved and involved a little too much tequila.

So sometimes, I have to ask myself if the price is right, would I?
Posted by Linda Medrano at 3:31 PM