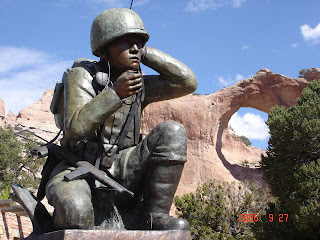 We took this photo at Window Rock, the capital of the Navajo Nation.

The image is of a young Navajo Code Talker who served in the Marine Corps during World War II. One of my husband Alex's grand-uncles was one of the original 29 Code Talkers.

After the Japanese attack on the Pacific Fleet at Pearl Harbor, Hawaii, young Navajo farmers and shepherds flooded off the Reservation and went to enlist in the Military. Some of them were as young as 15, and very few of them had birth certificates. Many of them carried their own rifles just in case they would be needed.

Philip Johnston, the son of a Protestant missionary had grown up on the Navajo Reservation and was fluent in the language. Since the Navajo language had no alphabet, it was almost impossible to master unless you had learned it at a very young age as Johnston had. He proposed to Military commanders that a program be developed using the language as the base for a code that would be impossible to break. The military was skeptical, but agreed to give it a try.

The Japanese had made significant strides in the War partly because of their ability to break every code the Americans had been able to devise to that point.

The candidates for the code talkers were generally recruited from the Indian Schools where the young Navajos had become fluent in both Navajo and English, plus they could read and write. An added benefit was that most of the boys in Indian School were very much involved in athletics, and in good shape which also made them prime candidates for the Marines.

The severe rigors of basic training and military service in the Marines were a walk in the park for these guys who grew up hard in the Southwest desert. The elite Code Talker Unit was formed in 1942 and was top secret. In fact, the existence of Code Talkers was not even acknowledged until 1968.

The original 29 Code Talkers devised a code that could not be broken. Their contributions saved countless American lives and hurried the end of the war in the Pacific.
Posted by Linda Medrano at 5:13 PM