DOG - It's What's For Dinner 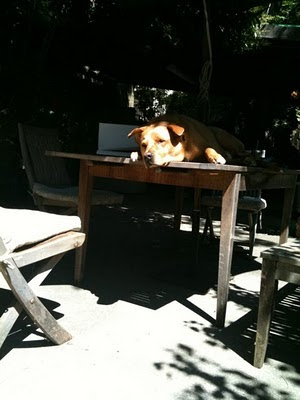 I get so tired of trying to figure out what to have for dinner. I'm a good cook, but doing it day after day is sort of uninspiring.

Actually, we have been going out a lot, but we usually do lunch out if Alex is home. We went to Jack London Square last weekend and it was really nice.

We had oysters on the half shell to start and a magnificent Chardonnay at a great restaurant called Il Pescatore. The fish was wonderful and fresh and we got to people watch for a couple of hours.

We were seated across from the "Last Chance Saloon" where Jack London did a lot of his writing. The place is basically a log cabin affair with a totally slanted floor. Lots of people outside sipping refreshments in the shade of the umbrellas.

We were served by a charming and handsome man named Marcello! He was such a delight and shared with us that he had his own catering firm as well. Whether the catering is wonderful or not, you'll have to admit, Marcello would look good doing it! 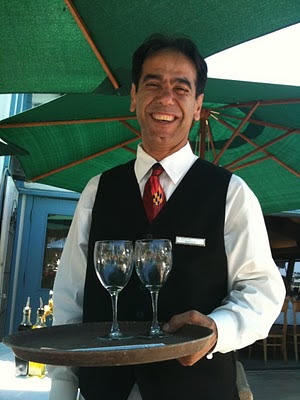 Alex was less pleased than I was with Marcello because he flirted with me. (I was not offended!)

It was a hot day and the square was packed! I adore the diversity of Oakland. You see everybody at Jack London Square! Such a nice "vibe".

A girl and her boyfriend walked past us and I had to ask her if I could take her photo because she had the most beautiful legs I had ever seen.

She was happy to let me capture her and then we emailed the shot to her. I was a little intimidated because she had a big old expensive camera and all I had was my iphone camera.

Still, the picture came out great! Of course, the people were so good looking that it would be hard if not impossible to take a bad picture of them! 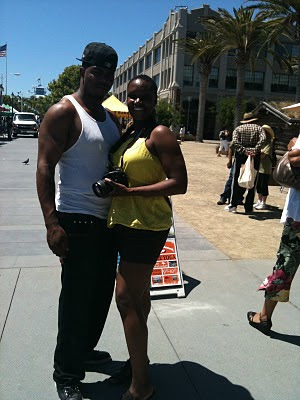 The woman had to be six foot tall, so her boyfriend is even bigger. Wow! They are hot!

The Square had a "pet psychic" working and I wanted to take Harry to see her but Alex said no because it was all fake anyway.

I disagree. I would love to know what goes on in his little brain. He has so many issues, (fear of trees, fear of noises, fear of laying down in a car ride even if it's for 17 hours) and maybe this woman could have helped him. For that matter, maybe he and I have some of the same issues.
Posted by Linda Medrano at 5:56 PM