Cows In The Mist 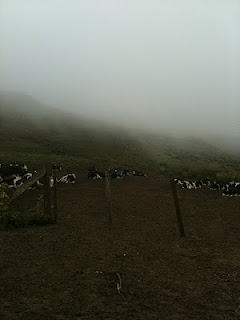 On Saturday, we piled into the wagon and drove from Alameda over to Marin County and began the drive up Highway 1 along the coast, our quest being a place called "Dogtown".

Now that is a wild ride! Beautiful, scenic, curvy curly roads, cliffs (not my favorite) and peeks at the magnificent Pacific Ocean. It's a slow drive with a lot of hairpin twists and turns that slow you to 10 mph.


Marin County is gorgeous. Lots and lots of trees, beautiful people, gorgeous homes, expensive cars, and green attitudes! I love going there, but it's a little too "wheat germ oil" a place for me to consider becoming a resident. There are tons of "retreats" tucked away in the greenery, as well as a plethora of massage studios. In fact, in the early 1980's, it was common for these massage studios to offer a service whereby they would stroke your body with a peacock feather for an hour as one of the "treatments".

It's all about yoga. It's fun and kind of crazy! Stinson Beach is one of the prettier beaches around. And the little towns you pass are all pretty much like a flashback to the 70's. Surf shops, surfer girls and boys, everybody calls each other "dude" in this area regardless of age or gender.

We pulled into Dogtown about 1 PM. I was starving by this time, but wanted Harry and Honey to see a place named Dogtown. 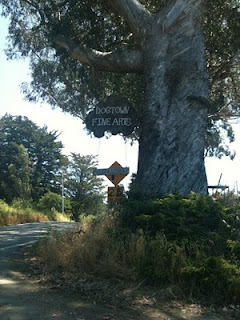 Unfortunately, there wasn't much to see. I think the population of Dogtown is 30. We did pull into a private ranch to turn around. When I saw 3 gorgeous Arabian horses, I told Alex I had to get a photo.

He told me, "No, there's a woman coming over here to tell us to leave." I said, "Oh calm down, Alex!" The woman approached us with a smile and I told her we had actually pulled in to turn around but that I had taken a photo of her horses and hoped she didn't mind. (Now, these horses are her babies, don't you know!) Anne, my new pal, is a tiny gorgeous silver haired woman with a big smile, a welcoming attitude, and a gorgeous tan. She and her husband run the ranch and have a B&B there called "The Loft At Woodville Ranch" and she gave us a brochure. The loft is a build out over the barn and from the photos, it looks amazing.

I took a photo of Anne with her youngest horse who was a really beautiful girl! 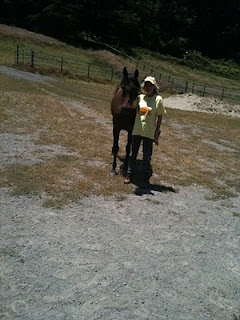 Anne is an endurance rider and had taken this horse up to Utah for a 200 mile ride two days before. Neither Anne nor the pony looked any worse for the wear!

This is a gorgeous area of California, and you really might think about trying "The Loft" if you get out this way.

If we continued on up to the next town, there were restaurants, shopping and all services and it was only 5 miles away.

We picked up sandwiches and drinks for us and wanted to look for a place to eat our lunch. Alex missed the turn off for the "visitor center" and we continued driving. Pretty soon we saw a sign for Inverness, and then Point Reyes National Seashore. Oh heck, why not just keep going, right? We finally got on a little road leading somewhere (as all roads do), and decided to take it. At a fork in the road, it offered us the option of going to the Lighthouse or the Beach. Hooray for Lighthouses! Let's go to the Lighthouse!

This little (narrow) road was very strange. We climbed and twisted for about an hour and went from summer at 72 degrees to about 40 degrees and so foggy it was hard to see your hand in front of your face. By this time, I think we both realized we had made a goofy choice but continued on anyway.

Harry was very unnerved by the cows that appeared in the mist. I was a little unnerved by all that green and nature and stuff all around me. 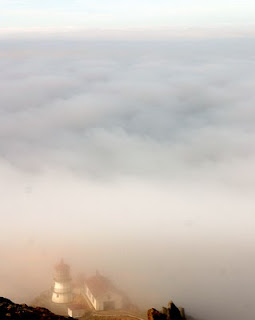 We finally got to the Lighthouse parking lot and ate our lunch in the car. It was freezing outside and I was fresh out of parkas so while Harry and Honey took a little walk with Alex, I stayed in the car.

I know it's scenic, but it also looks kind of like the perfect place for zombies or the hills have eyes type stuff if you ask me.

On the way back, we cut through a forest and I got very edgy because of all the trees. I don't do forests because of trees. I find them threatening and somewhat ominous. One tree is fine, but damn! When there are trees every place you look, I know that no good can come of that. What is lurking in there? What if they fall on us? Why are there so many of them if they aren't trying to intimidate us? 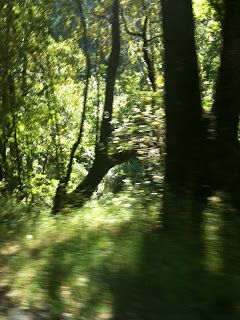 A lot of people disagree with me about this, but I don't care. Trees just scare the bejesus out of me. Harry feels the same way.
Posted by Linda Medrano at 8:28 AM