At Linda's House, Even The Dog Is A Wino 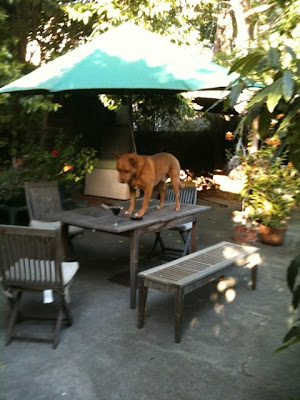 I know for sure nobody poured that glass of wine for Harry. In fact, we all know that alcohol is not good for dogs.

There are doggie downers that we can use for the 4th of July if the fireworks get to be too much for him. Harry is not a fan of noise.

I don't really know why he is on that table either. Alex says "Because it makes him feel good", but I think that's ridiculous. Why would climbing on a table make him feel good?

I can't help but think this is just one more example of this dog's peculiarity.

Alex was digging around in the dirt next to the basement where he has his man cave. (Believe me, this is a real man cave and you don't want to see it. I won't even go in there no matter what.)

Alex came out acting totally like he had found the lost tablets from that Indiana Jones movie. He found a real treasure. Now our house 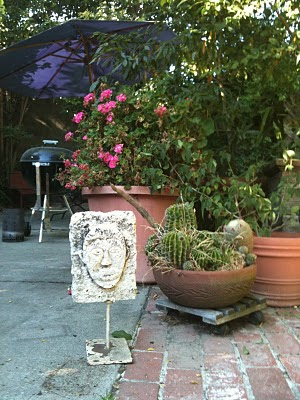 This is what he found buried down there.

I think it's kind of goofy and sort of cute. Alex thinks it's a relic from the Indians who used to inhabit the area. It's very heavy and very primitive looking. The thing is, it looks like it could be something that was created by aliens, don't you think? Who else would think to mount somebody's stone head on a stick?

I'm not bringing it in the house because of bad luck if it is from aliens. They might have it "bugged" so they can watch us in the house. I don't care if they watch us doing things in the yard, because it's nice to have an audience 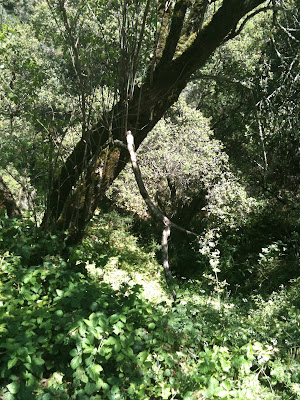 when you want one.

I really just don't worry about this "thing" very much. Now if it had come from an area like this, I would be much more concerned.

I guarantee you nothing good comes out of an area that looks like this one does. Do you see that weird assed tree limb sticking out all wrong? Oh I'm not saying it's anything evil about trees, but just what is the point of that? Uh huh. That's what I thought. I rest my case.


I mentioned that I took my wristwatch in to have it serviced at Cartier. Alex bought me a gorgeous timepiece 4 years ago and it worked perfectly until it just quit last week. We had to go to the Cartier shop in San Francisco to get it fixed, and fortunately, all it needed was a new battery. Cartier is a pretty upscale place and there were armed security guards all around. I had a sales associate by the name of Rand (of course it was probably Randy, but Rand is so much more sophisticated) who was a very upscale guy. Gorgeous suit, wonderful watch on his wrist, perfect hair, teeth and grammar, and an attitude that said "What are the likes of you doing in this fine establishment?"

We had no sooner walked in but Alex has to find the bathroom. I swear, that man has to use the toilet where ever we go worse than any 5 year old kid. (Personally, I only like home toilets if at all possible.) Rand gave Alex directions to the facilities and then escorted me to a desk to fill out my paperwork for the watch's repairs.

The whole place is as hushed as a church, and Alex comes up behind me while I'm sitting there. He announces to me in his normal pitch of voice, "Man! I really had to go! Man! I was wondering if I'd even make it to the toilet! Man! It must have been all that coffee this morning!" His comments echoed through the store and raised the eyebrows of everyone within earshot. 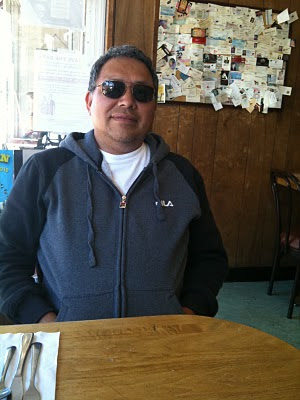 I had tried to "shush" him but to no avail. Rand kept inspecting my watch with a jewelers loop to make sure it was not on the stolen list, or a fake or something, and twisted his pretty lips into a little sneer. It never occurs to Alex that some things are just not "Cartier" conversations.

Rand warmed up considerably to Alex when he realized he was not my boy for hire, but my husband, and in fact, the purchaser of the watch.

I love my husband, but he can be so "ghetto" sometimes.
Posted by Linda Medrano at 12:33 PM