Barry Bonds Gave Me Such Joy 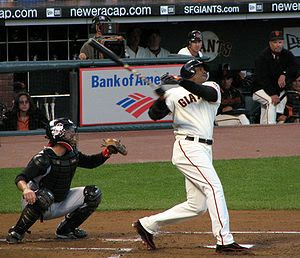 I followed MLB when Willie Mays was playing for my SF Giants. I adored Willie. When the Giants traded Willie, I lost my connection to the game. My trust was betrayed.

In 1986, the Giants acquired a player by the name of Barry Bonds. In my eyes, this guy was a "god". I still consider him to be the most awesome player of my lifetime (okay, at least right after Willie Mays).

Barry did not pander to the press corps. He was not apparently popular with his team mates. This mattered very little to me. I adored him! I still adore him.

My love for the game returned with Barry. The thrill I got when he was in the batter's box is one of the greatest I've ever felt. I am heartbroken that Barry no longer plays.

Don't bore me with "he cheated". I do not believe he did. He never cheated me out of a wonderful experience! I screamed my voice away and felt dizzy with pride for this man when he broke record after record.

If he took steroids to recover from injuries, why should I care. I am not convinced he did or that it would matter one way or another. He was the best. I loved watching him play and until someone else of that caliber takes the field, baseball is over for me.

Go ahead, tell me I'm wrong. You can't take away my love for the greatest hitter who ever played the game.
Posted by Linda Medrano at 6:44 PM