My Date With A Boxer 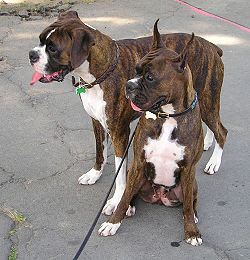 This photo is a little misleading. I did date a boxer (a real one, the man kind) once in the early 1980's.

Miguel had been a Golden Gloves middle-weight champion about 5 years earlier. I met him when he was working for a moving company. He passed me several times in the hall of the apartment house I lived in, and I thought he was kind of cute.

The other guy who was working with him kept calling him "Champ" and I asked if that was his name. That's when he told me he had been a boxer. We chatted a bit and it was pretty clear that he was interested in me.

He came to my apartment door after finishing moving a neighbor in to an apartment on my floor and asked me if I'd have dinner with him. I had a few reservations, (no, more than a few) but I said sure! Pick me up at 7. I've always like boldness and Miguel had that going for him. Plus, I mean, hey! The guy had a job! That's always a good sign. (Uh, yes. I was hard up.)

Anyway, I didn't take it as a good sign when 7:30 rolled around before Miguel arrived at my door. I said something about not being sure he was going to show up, and he replied that he needed to have a few drinks first to calm his nerves. Well, he was only weaving slightly when he came in.

He got into a boxer stance and started throwing play punches toward me, telling me to unwind! Loosen up! Let's have fun! By this time, I was in a full-fledged panic attack. Dear God!

Miguel had looked great in working man's clothes, with the big shoulders and biceps, etc. It had not translated that well into a suit that was way too tight across the shoulders with pants that can only be called "floods". His slicked hair looked greasy and he was pretty sweaty in the face. Uh huh. Loosen up, Linda!

I suggested that we go to my favorite Chinese restaurant around the corner. I was smart enough not to get in the car with this man. He said, why don't we have a drink first and I said fine. I think I had a bottle of cheap white wine in the fridge.

We went to the Chinese place and ordered. Miguel spent half of the time in the bathroom. My fortune cookie said to watch out for surprises which I considered to be ominous.

Miguel walked me home. At the door to my apartment house, he came in for a kiss, shoved his tongue down my throat while grabbing a boob with one hand and my crotch with the other. I gently pushed him away and told him I had a great time. Miguel assured me he would call me soon so we could do this again. Oh joy!
Posted by Linda Medrano at 7:54 AM