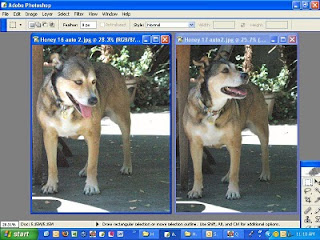 Terry at Oh For Pete's Sake tagged me with this little game deally bop! Okay, I am to take the 10th photo from my first file and post it and write a piece describing the photo. Okay, then I tag five other folks to do the same thing. I've told Terry a number of times that I have trouble following directions, but I'm trying, so here goes!

We hired an artist to do a portrait of Honey about four years ago. The woman, Magdaline Chan, came to our house to photograph Honey before she began the life sized watercolor painting. She took about 200 shots, but we chose the photo on the right. It's a beautiful painting.

Right from the start, we knew Honey had some troubling health issues. When we took her to the vet, right after adopting her from the shelter, the vet told us she had some severe arthritis in her hips and hind legs. Honey was about 5 when we got her.

Honestly, we didn't expect to have her for long, but since I loved her so much, I wanted her to be as happy and healthy as she could be as long as we had her. It's been 5 years now and she's still here! We've had orthopedic surgeons look at her and they say there's really nothing that can be done except to keep her as pain free as possible.

She has had acupuncture, massage therapy, as well as a variety of herbs. Honey was so amazing with about 100 needles sticking out of her! She looked like an alien canine queen.

Honey takes medication and seems to be mostly doing all right. For a big dog of 10 years old or so, she seems to still have a lot of life and love in her. She has her good days and her bad days, but hey! Don't we all?

Now I'm going to tag 5 people. And you are supposed to do the same thing, i.e., go to the first photo file and pick the 10th photo, write about it, and tag 5 more people to do the same! (Or go to Terry's and look up what she says to do, whichever makes the most sense to you!) And the lucky 5 are: Ta Dah! : Here they come! :

Peg at Square Peg In A Round Hole

Suzicate at The Water Witch's Daughter

Lee at The Fat Lady At the Gym

Paula at How to be a Cat Lady Without the Cats
Posted by Linda Medrano at 11:12 AM