Confessions Of A Counterfiet Mexican 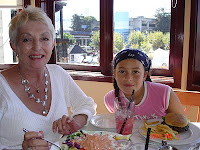 This is a photo of me dining with Olivia. Olivia's Mom Kim is a good friend and a neighbor. Kim is a firefighter in San Francisco. She's my hero!

Now, you may notice that we are not at a Mexican restaurant. I really do not like Mexican food unless I make it myself, and I seldom do. There's something about those refried beans that just turns my stomach. I like beans just fine, but don't smash them up and smother them with cheese. That's just nasty.

Also, why do Mexican restaurants goop everything on to the plates. You can't really even tell what's what. Everything is covered in some red or green sauce and has what? More cheese. I love cheese, but I don't want it melted all over my food.

There is nothing like a wonderful goat cheese with truffles. A lovely brie can make the sun shine brighter. But all that gloppy cheese melted all over Mexican stuff is just ridiculous.

If you push me a little further, I have to admit I'm not a fan of tequila either. Alex and I had a physical fight many years ago after drinking tequila. No harm was done because we were too drunk to do any harm, but we did swing in the direction of each other. When we awoke the next morning, we both knew we had been possessed by tequila. We never did that again. The occasional margarita is fine, but shots! Oh no thank you! Not ever.

Now I have to also confess that I am not a fan of Mexican beer. I much prefer German beer. Sorry, it's just better beer!

When I was in Mexico many years ago with a blue eyed husband, people would speak to me in Spanish. (Yes, I had black hair and much darker skin because I tan very easily.) When I would shake my head and tell them "No habla", they would look at me like "uh huh! Sure you don't speak the language! Not around your white boyfriend anyway!"

I do know a few words and phrases. I know how to ask "Where are the black cats" for example. This could be something I might need to ask if I'm in a neighborhood that is heavily Latino. It just shows that I do know something. In case you ever need to know, just ask "Donde estas los gatos negros?" and people will know you are trying.

I had a Mexican boyfriend once. I was trying to compliment him and said "El Grande Deeko". He thought I was calling him a big dick, but not in a good way.
Posted by Linda Medrano at 9:18 AM