My Pride, My Joy, My Cyrus 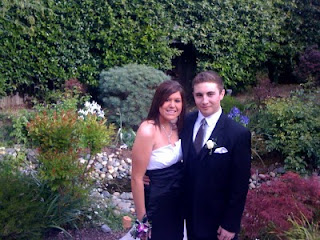 From three minutes after his Cesarean delivery into the world, 17 years ago, this guy has owned my heart. I thought I would never feel that amazing love I felt for my own children again, but I was wrong.

Every thing about him delighted and amazed me. Cyrus is one in a million.

He's my best friend. I know that I hold a special place in his heart and he knows that he is my heart. If we go to a party when the family is there, Cyrus holds my arm to make sure I won't stumble. He brings me my diet coke without me having to ask for it. He is so attentive that it's amazing. To him, a Grandmother is a very special thing. I treasure him!

Several weeks ago, he got into a fight at school. Well, sort of a fight. He and a couple of friends were fooling around and he told one of the guys to "shut the F up". The guy said "Say that to me again". Cyrus did. The guy punched him in the mouth.

Cyrus is a big boy. He's strong as an ox and works out. The other boy hit him again in the gut telling him to "fight back" and "man up". Cyrus told him "You're my friend and I won't hit you." The guy who was hitting him quit and walked away saying he was going to call his mother to come and pick him up.

Cyrus was terribly upset over this event. When he told me, he was having trouble controlling his voice. I ached for him so much. He was not physically hurt or in pain, but the emotional side of this fight just broke his heart.

I was so proud of him I couldn't see straight. He behaved in exactly the right way considering the circumstances. Fighting at school can get you thrown out of school. Cyrus wasn't willing to take that risk. Also, he knew that his friend was upset about something else and taking it out on him. The other guy apologized the next day. They are still friends.

He has a philosophy that is so important. "High school is great, but it's not my real life. My real life is ahead of me. Good times, bad times now, but they aren't really that important. I'm waiting for my real life!" God I love him!

Cyrus's triumphs are my triumphs, his pain is my pain. I adore all of my grandchildren, but only have one who owns me.
Posted by Linda Medrano at 12:07 PM