What The Hell, and How Did That Happen? 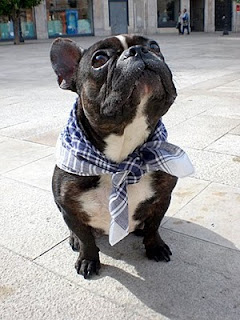 My next door neighbor, Mary, has three dogs. One is a 2 year old Rhodesian Ridgeback named Dutch who has been neutered. Dutch and my Harry are the best of pals. They are both big, and a red orange color so people really have trouble telling them apart unless they are close enough to see Dutch's ridge down his back.

Sansom is a pug and he's about 6. He has never been neutered. He's a little on the fat side, (like most pugs), but he's cute. Mary recently added Delilah to the mix. Delilah is a French Bulldog and about 8 months old now. She's a very loving girl! Delilah runs up to people, throws herself down on the ground and puts her legs in the air just at the idea that someone will speak to her. In other words, she's sort of a free and easy female.

Mary and I went to the coffee shop around the corner this morning for Swedish pancakes. Yummers! When we got home, a neighbor guy came over to say hello and to ask if he could borrow Sansom. He was joking but claimed that he loved Pugs more than any other kind of dog! (He's Chinese and the Pug was in China and full sized before it went to England and got to be a tiny dog through breeding.)

Mary let her dogs out of the yard and Dutch and Sansom ran out, followed closely by Delilah! Uh, what's up with Delilah? She's gotten very fat! When she rolled over on her back, all of her nipples were engorged. Uh, Mary, what's up with your dog? Is she preggers?

Mary said "Oh no! She can't be pregnant! She was in heat, but I watched them pretty carefully." Uh huh. "Pretty carefully" can end up "slightly pregnant" is my experience. This little girl is young to be a mother. But she's probably going to be one. And the cross between a Pug and a French Bulldog may be interesting. Of course, maybe Sansom is not the culprit in this case. I did see Delilah taking herself for a walk on several occasions during the last couple of months!

I know it's not Harry's spawn because he is neutered, plus, if you can put judgments on things like this, I also think he's gay. Harry and Dutch have way too much fun humping each other!
Posted by Linda Medrano at 3:59 PM