This Is What Happens To Bad Guys At Our House 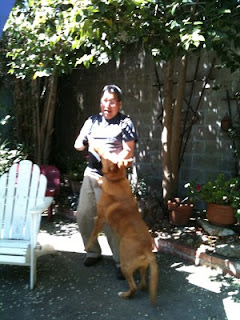 If you enlarge the photo, you can see the terror in Alex's eyes! I'm glad he was wearing a training glove or he might have lost his hand.

The thing is, Harry was just playing here. If he's playing, it's bad enough. When he's serious, it's worse.

After we bathe Harry, I hold up a towel for him. I had better be sitting down when I do it. Harry pretends he's a bull and I'm a matador. The first time, he knocked me on my butt! Now I know enough to hold the towel off to the side.

The boy means no harm. He's just big and strong and playful. (Oh, and there's goofy too, but I left that off.)

Now, if you really want to hear about goofy, I"m going to do a little bit on my husband now. Lord knows, I love the man, or I would have poisoned him a long time ago. Alex's company is offering a new health insurance plan and we need to make our decisions about it by mid week.

The "cheap one" gives you "some benefits" after you pay about $1000 per person out of pocket. Uh, well, that's fine and dandy. Now add on to that that if you go to an out of "preferred provider" for surgery, (or hospitalization), you'll being paying 40% of both out of pocket. No problem. You need a heart surgeon in the program even if he or she is lousy and doesn't have a license? Check! Now neither Alex nor I are in the 25 year old range (age wise). We may have health issues coming up in the next year.

I told my beloved idiot of a husband to do what he wants. I won't pay for it anyway. He will. Guess what? He changed his mind about which plan to get. Why is it always so hard? Just tell me that!
Posted by Linda Medrano at 4:00 PM