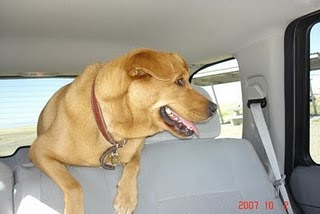 Mom's friend, Peg, over at Square Peg in a Round Hole suggested that Mom let me do a post on Wednesdays since the word “hump” is such a good thing to me! This is going to be a story of my most wonderful day ever that turned into my worst day ever and believe you me, I have had some bad days.

I'm a lab/pit/shar pei mix. And I am a really good looking guy. My Dad calls me a PMF (and I know that's a good thing because it's the same name as he calls the security guy at the military base who Mom makes goo goo eyes at!) The first part of the words is Pretty. The other two I'm not so sure.

Okay, back to hump days. The only real humping I've ever done is with Dutch, and since we are both neutered males, some people may say it doesn't count for much. Okay. I would have humped Lola but she's too short. In fact, she's so short and small that her head fits right in my mouth. I love to hold her head in my mouth and make noises. And Lola loves it too. Anyway, humping Lola is out of the question.

Honey, my sister or something, thinks I'm stupid. She's wrong. I've been to obedience training 3 separate times. And each time I passed. It's just that I have a touch of ADD Mom says. I get distracted really easy.

I got adopted three times from the Shelter. I am a really good boy and I got thrown in the night drop box three times. Three times is a lot to be taken in the car and tossed into a metal box in the middle of the night. I'm not sure why those people couldn't keep me or didn't want to keep me. Maybe it's because of the ADD thing. Never mind. I'm in a FOREVER home now. (But Mom says I still “have issues”.)

The worst distraction in the world I have is squirrels. Squirrels are not nice critters and that's a fact. They stand in the trees at my house and shake their ugly tails at me. They make these awful noises and just shake back and forth. They climb trees faster than you can imagine. I try to go up after them but I just can't go as high as they do. I chase them all the time and bark my head off at them. But they just don't go away.

Picture this. Dad is gone on a trip to Germany, (whatever that is), and Mom goes to the store. I'm in the back yard. There is this squirrel right in front of me! He's a fat assed squirrel too. I lunge for him! I catch the sucker! I get him by his neck and I shake him really hard! I let him go and figure I'll chase him across the yard! Guess what! He doesn't get up! I yelp and scream with joy! This is the best day ever!

I grab the dude by his neck and carry him in the house where Mom is just getting home from the store. She sees me and she screams in the most horrible voice I've ever heard in my life! “Drop it Harry!” Shoot, I know when to pay attention. If she's sounding like this, there's something really wrong! Is she dead?

The squirrel dropped and Honey comes up and tries to sniff and mess with my squirrel. Mom grabs us both by the collars and throws us in her office and shuts the door. Now this room is not big enough for the both of us! We re both screaming in outrage! I hear Mom on the phone. “Henry! Can you help me? (Now who the hell is Henry??) Henry comes over and I can smell him from the space under the office door. He laughs and I hear Mom say, “Henry, are you taking that with you?” and Henry says “Sure”. Thank you Henry, Mom says.

So, to make a long story short, Henry took my squirrel. This was the worst day ever! I wouldn't even look at Mom for another 2 hours. I was never so mad in my life! Now, I ask you, “WHAT DID HENRY DO WITH MY SQUIRREL?” I'm just sayin...

Posted by Linda Medrano at 7:38 PM