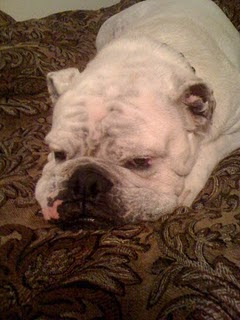 Harry wants in on the action. I'm letting him do a guest blog.

My name is Harry and I'm a four year old dog. I'm handsome and big and people all seem to like me a lot. Other dogs usually like me too, because I love to play and have a good personality. I have a neighbor guy named Dutch, a Rhodesian Ridgeback, who is about my size. Folks say we look alike since we are both that really great shade of orange-red. He and I hang out sometimes and we both love to run. We also like to hump each other but since we are both neutered now, don't take that part too seriously because we don't. Dutch has a house mate named Samson who is a Pug. He's kind of a yappy guy and not nearly as much fun as Dutch. There's another dog there too named Delilah. She's okay. I hear she's a French Bulldog, whatever that means. Dutch likes her better than I do. She yaps a lot too.

I live with Honey. Honey is either my sister or something. She's smaller than me but much meaner and she always gives me dirty looks to let me know what I'm not supposed to do. She can be nice sometimes, but usually not. I mean, Honey will act like she wants to play, but then she gets mad and growls at me or bites my ear for no real reason. Okay, I took her toy, but I was only playing.

We also have a black cat named Smokey who lives in our house. Smokey hisses and spits at me whenever he sees me. Whatever, Dude. Cats are weird anyway. They don't leave me alone with Smokey because as my Mom says, "That would be looking for trouble!"

I have a cousin named Lola. I love Lola. She's little and black and very curly. She lets me put her head in my mouth and hold it there. I love to do that! Then we chase each other and she bites me every place she can reach. She's funny! Sometimes she makes me get tired because I love to run, but Lola never quits. She just keeps running and running and biting me so I'll chase her. And she keeps falling in the fish pond and Mom gets mad about that. Lola also poops in the house, but nobody gets mad at her about it. (What would happen if I tried that? I wouldn't even want to know!) I don't care, I still love her. She comes to visit a lot. Honey has tried to kill her a couple of times, but Mom yells and Honey stops. I hope Lola knows that Honey doesn't like me that much either and we're brother and sister (or something like that).

Now, I have this other guy cousin, Winnie. I've been to his house a few times, and he's come to mine a few times. This guy is trouble if you ask me. Because he's family, I try to love him. It's not always easy though. Mom taught me it's not polite to show my teeth. What does Winnie do? He walks around with teeth showing all the time. And he's kind of funny looking. He doesn't look anything like me and Honey and Dutch. Winnie snarls all the time and he makes really strange noises when he eats. Even when he just breathes, he makes noise. Winnie slobbers all the time too. It makes me mad when Mom says "Oh Winnie! You are so beautiful!" She's got to be kidding. How did this guy get to be my cousin, anyway?
Posted by Linda Medrano at 11:08 AM