The Queen of Russian Hill 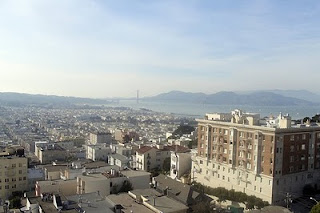 The large building shown on the right side of the photo is known as the Queen of Russian Hill located in San Francisco.

I was invited to a sweeping penthouse apartment there (which covered the entire top floor) when I was in my early 30's.

My friend Angela invited me to come to Christmas dinner and as my children would be with my ex-husband that day, I accepted her invitation. (I usually opted to celebrate Christmas Eve with my kids and let the ex take them on Christmas day.)

I met Angela at her gently used clothing store not too far from where I lived. Angela specialized in only the top quality clothing, usually from local television personalities. Some of the clothes had only been used for one tv broadcast. I found out that one of these women was exactly my size! Angela would call me as soon as this person brought in a load of clothes. For shopping in a resale shop, I was very well dressed!

Angela was a very interesting woman, about 25 years older than I was. Her shop was cozy and beautiful and had fabulous lighting and fixtures. I actually felt that I was in someone's bedroom when I was in her shop.

Since I was a favorite of hers, we began a friendship. She had a boyfriend and told me all about their relationship. She also had grown children, about my age. Angela was a real beauty.

When I would come in, she would slip her silver flask of scotch out of her drawer and get a couple of cut crystal goblets and tell me it was time for a "drinkee". (I thought this was hilarious!)

I bought a bottle of very expensive scotch and set off for her apartment on Christmas Day. Angela had told me to come at 2 in the afternoon, and I took a cab so I wouldn't be late. There was a winding driveway leading up to the front of the complex, and a doorman hurried over to get the door of the cab for me. Hmm. Not exactly like the place I lived, now was it?

I took the old elevator (with an elevator man) to the Penthouse. The lobby had impressed me quite a bit too, with antique oriental carpets and huge chandeliers. Very upscale.

I rang the doorbell and a man answered. He looked like a guy who would be posed advertising expensive whiskey and sipping it on his yacht. In other words, wow! He introduced himself as "Angela's friend". He was dressed so impeccably in a tuxedo and blindingly white shirt that it made me feel somewhat under-dressed.

Angela called out from down the hall and invited me to come in to her bedroom while she got ready. (Umm, it was after 2 PM. What did I misunderstand I wondered.) Angela was sitting in front of an antique vanity putting electric rollers in her hair when I walked in. She kissed my cheek and continued her getting ready, but asked her boyfriend to bring us in a drinkee.

Well, okay, I'll drink to that! Angela asked me if I had a chance yet to look around and I told her not really. "Well, go!" she waved a hand and I dutifully went. Every room in this place had the most astounding views I've ever seen. The Golden Gate Bridge was out the window as was Alcatraz Island. The Bay Bridge and the Oakland hills were on the other side.

As I wandered from room to room, I couldn't help but notice that Christmas lights were in every room and twinkling merrily. The furnishings were all jammed together. I think there were four couches in the living room, and while it was a big room, it was a little startling to see four big couches and maybe twenty chairs. And nothing matched. Nothing seemed to go with anything else. It was as if a deranged antiques collector had gone hog wild and just said "move it all in" somehow. Strange.

The doorbell rang and another couple of people arrived. Handsome made drinks for everyone and Angela made her appearance. She was wearing a bra, a full slip, and a lace "bed jacket" with fluffy pink high heeled slippers. Her hair was still in electric rollers and she was full made up, except for having forgotten (neglected) to put on one of her false eyelashes. It is hard for me to have a conversation with a woman wearing one false eyelash, but no one else seemed to bat an eyelash at this.

More people arrived and Angela's boyfriend pulled the turkey out of the oven, to the collective oohs and ahhs of the now assembled crowd of about 20 people.

We sat down at the massive dining room table and several people made toasts to the hostess. Did none of these people realize this woman was sitting there in her slip? Did nobody else notice she was still wearing electric rollers in her hair? Did it not bother any one else that she was wearing one false eyelash?

I met Angela's daughter and her husband. They were "Life Springers" (uh, okay) and very friendly, if a bit bizarre! They were so greatful to me for sharing! (They told me how greatful after every word I said, and then looked at each other and giggled.)

I think it was F. Scott Fitzgerald who said "The rich are different" and he wasn't lying! I felt like a bit player in a foreign movie that I really didn't understand because even with subtitles, it was just too confusing.

And that was my experience with The Queen of Russian Hill.
Posted by Linda Medrano at 3:51 PM