Well Clutch My Pearls - It's Amsterdam 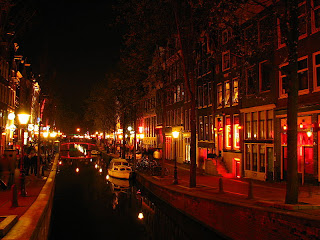 My first trip to Europe was to the city of Amsterdam. I wasn't really that excited to see Amsterdam but hubby had a conference there and I was coming along (since he promised a trip to Paris after the conference.) I knew they had windmills and wooden shoes, but other than that information (gleaned from the ride "It's A Small World" at Disneyland), I really hadn't a clue.

We got in to Amsterdam and to our hotel room relatively early, but after about 14 hours on an airplane, we were both exhausted. Alex went to the conference center to check in, and rather than hanging around the room, I decided to go take a look.

I found a 3 hour tour that sounded kind of fun (plus, if I went to sleep too early, it would take me longer to acclimate to the time). Generally I like to go out on my own, but with no idea of the area, I thought a general overview would be helpful before I started my solo explorations.

The tour guide promised we would view the canals, windmills, the amazing architecture, Anne Franks house, and a couple of museums as well as the famous red-light district. Hell yes!

I learned pretty quickly that the canals were everywhere and the houses (tall and very skinny) were gorgeous! We saw some wonderful examples of Dutch architecture every place we looked.

The three hours went fast believe it or not, and I was excited to tell Alex how I had spent my early afternoon. The tour had also included taking us to the famed red-light district where the prostitutes sit or stand in windows, only closing the curtains when a customer came to call. The part that was amazing to me is that this district was in a very nice area. Actually, I would be completely unafraid to walk through the district even at night.

Far from what I expected, the girls were dressed in at least as much clothing as I see on the beach in San Francisco! A pair of shorts and a halter top were about as racy as it got in those windows.

I also got a chance to look inside the popular "Coffee Houses" where you can order your favorite type of marijuana along with a cup of coffee and a snack. (Uh, I looked, but didn't partake!)

Dutch people are a total delight as well. They are the most open minded people I've ever encountered. Friendly, helpful, and slim and tanned! Everybody rides bikes in Amsterdam. (And I'd swear nobody was over 27 years old, but I must be wrong about that!) It seemed that just about everyone spoke English and they were the best about helping you get where you wanted to go.

The Dutch are not particularly religious. They have no issue with homosexuality, prostitution, sexuality, or smoking pot. Actually, I think they are very civilized. Moral judgments are just not part of their make up.

We were watching tv one night, a rerun of an American sit com. The next program was hard core pornography (well sort of), it showed the proper way to use a condom for all kinds of situations. The next program was something like "Law and Order". It was marvelous! Alex and I sat and giggled like teenagers! (Oh it was late enough at night you wouldn't worry about the tots watching!)

If you go, keep an open mind. Enjoy the gorgeous sights and laid back ambiance of this magnificent city!