Can You Spot The Navajo In the Bushes? 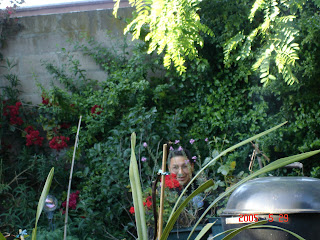 So could the guy from Idaho who saw Alex in HIS car at the Atlanta airport car rental lot.

Mr. Idaho and his two ladies approached the car with extreme caution. They all walked up to the car where Alex was trying to set up his GPS, his iphone, and his other gear before he took off from the car rental parking lot.

Alex looked up and saw two women slowly backing away from the car, but the man cautiously approached the car. Alex rolled down the window and said "hello". The man from Idaho said, "we're here for our car now."

Alex was a touch confused. The Idaho guy said that he assumed Alex was warming up the car for him. (Is that how they do it in Idaho?) Alex turned the car off, and got out, saying "I'm so sorry. I think this is the car they gave me." The Idaho man looked at his ticket as well, and he and Alex realized they had been given the same vehicle.

At this point, the women were relieved and relaxed their stiff stances! (Maybe Alex was one of those "car jackers" you hear so much about in Idaho!) The decision was made to go to the office to have this straightened out.

The man from Idaho turned in the direction of the main office, quite a distance from the car lot and started walking. Since Alex is a member of the "preferred clients" for the rental firm (and is there so often he gets invited to kids birthday parties of the employees), he said, "why don't we just go here?" pointing to the "You are the rock stars of the car rental client gang!" sign and section about 20 feet away.

They walked in and told the car rental lady that the same car had been given to two clients. Alex added that he had already put his "stuff" in the car. Being a rock star client, the woman assured Alex that the car was indeed his, and that Mr. Idaho and his party would be given another car.

Alex called me snorkling with laughter because the guy thought he was the one hired to "warm up the cars" for the real clients! Oh my goodness! I can always spot the Navajo in the bushes, but not always at the car rental place!
Posted by Linda Medrano at 5:02 PM