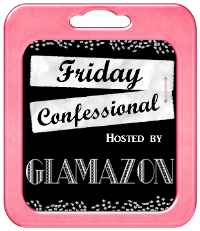 Is it that time already? I've been thinking about whether or not I have anything to confess this week and decided I would do this even if the answer is "no"!

I like going to the Glamazon site so much that I feel that I have to participate in the program for my own good.


Sin Number One: I didn't get up with hubby at 4:30 AM before he left to go to the East Coast. Make his coffee? Make his breakfast? Uh, that'd be a NO since it's the middle of the freaking night.

Sin Number Two: I told someone "the check's in the mail" and it isn't. This is for no reason except I don't feel like writing it yet. So, yeah, I lied.

Sin Number Three: I told Susan, my hairdresser, that I would stand outside of her shop and tell everybody who walks by "Look what Susan did to me" if she wouldn't open her shop on Monday, her day off, and do my hair. Desperate times call for desperate measures.

Sin Number Four: I used to call my grandkids "no-necks", but fortunately, now they have necks. (Most of them anyway.)

Sin Number Five: I told a friend I really want to have lunch with her, but I don't. I lied and said I have to stay home because I'm expecting a package. I like her fine, but until I get my hairdo sorted out, I'm not going out.

Sin Number Six: I told my daughter not to take a cake making class because it would be asking for trouble. That hurt her feelings but it's true.
Posted by Linda Medrano at 2:29 PM